Galleries 3
Collections 0
Groups 0
From "Biographies of Western Photographers" by Carl Mautz
"Shew, William
Born in Providence, Fulton County, New York, 1820; died 1903. Learned the daguerreotype art from Samuel F. B. Morse; active in Boston, 1841, superintendent of J. Plumbe's Gallery; manufactured daguerreotype cases. Came to California during the gold rush, daguerreotyped the Pacific coast and western views in J. W. Jones' group preparing material for the "Pantascope," c. 1849-50. He left New York, 1851, traveling via the Isthmus, arriving in San Francisco on the ship, Tennessee, March 4th. His cameras and equipment were shipped via the Isthmus, and while awaiting their arrival, he tried his hand at mining. He set up a portable daguerreian saloon [sic] on the Plaza, on Kearny Street, between Clay and Washington, then moved to a vacant lot on Washington Street. Later his saloon was located at the corner of Clay and Dupont; his daguerreian gallery was at 113 Montgomery Street 1859; 421 and 423 Montgomery, 1865; 121 Kearny Street, c. 1871; 115 Kearny Street (sometimes referred to as the Shew Building), 1874-80; 523 Kearny Street, 1881-1900+. Numerous photographers were trained by and worked for William Shew before setting up galleries of their own. Aside from his early daguerreotypes, Shew was widely known as a portrait artist. In the 1850s, Shew actively participated in politics; the first Free-Soil Convention was held at his rooms on the Plaza, October 8, 1852; he served on the Board of Education at one time." 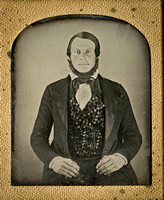 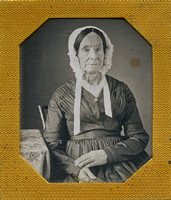