Galleries 1
Collections 0
Groups 0
John William Newland was active as a daguerreotypist in New Orleans, Louisiana in 1845. The New Orleans Daily Tropic of May 24th, 1845 published an advertisement for the daguerrian gallery of J.W. Newland at 124 Royal Street.

The middle aged man below is unknown. This mid 1840's 1/6th plate image taken in the United States is the only know daguerreotype by Newland prior to his leaving the US. Curiously, the daguerreotype was fitted in a (Matthew) M Brady leather case - New York City. Plate hallmark is SCOVILLS -made between 1839 and 1850 by James ML Scovill and WH Scovill in Waterbury Connecticut.

English born J.W. Newland traveled the world with his extraordinary display of over 200 views and portraits taken on his travels in the Southern Hemisphere. His Daguerrean Gallery which was set up first in Sydney in March 1848, then in Hobart in a building on the corner of Murray Street, included:
The only correct likenesses ever taken of Pomare, Queen of Otaheite, the King, the Royal Family, Chiefs, and several other Natives, Beautiful specimens of the New Zealanders, Feejeans [sic], Peruvians, Chilenos, Grenadians and panoramic views of the City of Arequipa, Peru etc.(47).

No record of Newland's visit to New Zealand exists and no daguerreotype portraits of Maoris from this date survive in New Zealand or Australia and he does not seem to have sought Aboriginal portraits for his collection.
Boyes sat for Newland on 27 December 1848 and, not surprisingly, was displeased with the result, which he sent to Lady Franklin in England. However, Newland also took whole plate daguerreotypes of Hobart and one of these was a view of Murray Street from his studio window. It is the earliest extant Australian view daguerreotype and the most impressive of the few which have survived.
Newland was a skillful, energetic photographer and a public showman. In addition to his trunk of daguerreotypes, he carried an oxyhydrogen microscope and lantern, a chroma-trope and a diorama. Newland had previously shown his daguerreotypes and other entertainments in Sydney. He proceeded to India where he established a studio in Calcutta between 1852-1854.

Only one Australian portrait by Newland is known (it is a rare example of daguerreotype stamped with the photographer's name) of E.T.Y. McDonald, publican of Sydney. A bright and direct image, this portrait has an impact superior to the few examples of any local Australian's work, with the exception of a portrait, by an unknown photographer taken around 1850, of Hobart auctioneer Thomas Y. Lowes.
link here http://sydney.edu.au/museums/collections/photographer_jw_newland.shtml
In March 1848 after touring through Europe, South America and the Pacific the photographer J W Newland opened his studio in Sydney. He received an enthusiastic response to his work and some wealthy locals such as the publican of the Forth & Clyde Hotel Edward McDonald posed for him. This image is one of the earliest surviving Australian Photographs, and is the only portrait daguerreotype by Newland still known to exist. A hand tinted daguerreotype it has Newland's stamp on the bottom right hand side of the mat.

Newland closed his Gallery in June before he left for Hobart in September. A view of Murray Street Hobart taken in the same year is the earliest Australian view daguerreotype yet located. http://www.google.com/imgres?q=jw+newlands+photographer+hobart&um=1&hl=en&sa=N&qscrl=1&nord=1&rlz=1T4RNQN_enUS464US465&biw=1397&bih=632&tbm=isch&tbnid=9S4oH-ySMP0AXM:&imgrefurl=http://pinnacletimes.wordpress.com/2009/03/&docid=lHl0BEXgwU5l0M&imgurl=http://lh4.ggpht.com/_hC30sWZ-gmw/SbV-tNBGrMI/AAAAAAAAE8E/iq2ZyFCazvY/fmproc6ad%25255B1%25255D%252520(1).jpg&w=600&h=394&ei=cELAT9XyEuHG6AHoitihCg&zoom=1

Newland returned after his travels to New Orleans in 1859 when L'Illustration (Paris) published an engraving of the New Theatre in New Orleans after a photograph by J.W. Newland. Others report Newland died in 1857 - an early victim of the Indian Mutiny.

2 Photos of Newland's taken in India - at this link from Luminous Lint
http://www.luminous-lint.com/app/photographer/J_W__Newland/C/

A J.W. Newland daguerreotype was sold at Christie's Auction House in 2000. Details at the link below, but no photo of Newland's 1/4 plate image of an Indian and English couple. http://www.christies.com/lotfinder/lot/r-lowe-and-jw-newland-portrait-1893005-details.aspx?from=salesummary&intObjectID=1893005&sid=8eb3bd35-0b81-4015-b0bb-8fdb9ea0c6b9 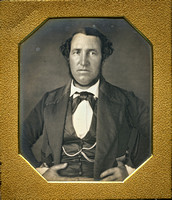