1 photos
Solomon Carvalho was born in South Carolina in 1815. He was a portrait painter, daguerreotypist, and expeditionary artist. He was employed by Jeremiah Gurney at his 349 Broadway studio in 1853 as a colorist.
In 1852, Carvalho accompanied John C. Fremont on his fifth expedition from Missouri to Utah, a journey that required travel over several ranges in the Rocky Mountains. Carvalho became seriously ill and left the Fremont party in Parowan, Utah and then traveled to Salt Lake City. While in Salt Lake, he became a popular portrait artist with subjects including Brigham Young, authorities of The Church of Jesus Christ of Latter-day Saints, and other Utah notables.
In 1857, Carvalho went on a peace mission with Brigham Young in central Utah where he painted portraits of Native American leaders such as Wakra, Indian Chief. Carvalho was a contemporary of the Rocky Mountain school of painting. Rio Grande River(1854–55) is an example of his landscape work. His daguerreotypes are the basis for book plates, oil paintings, and wood block prints. Adventures in the Far West, a book containing his reflections on Mormon culture, was published in 1857.
He died in New York in 1897. 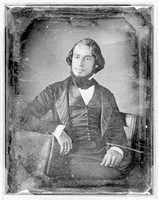