Jules Émile Saintin was born in Lemé (France) and was a pupil of Michel Martin Drolling and François-Édouard Picot at the Ecole des Beaux-Arts in Paris in 1845.[1] It begins at the Salon des artistes français (Salon of French Artists) in 1850 and 1853 by pencil portraits.

In April 1854, he went to live and work in the United States, where he painted portraits a notable portrait of the Senator and Vice President of the United States John C. Breckinridge), landscapes and Indian subjects.
He returned to Paris in 1860 and develops a workshop where he made paintings with American themes, and genre scenes.
In 1876, he was appointed Commissioner of the Centennial Exposition in Philadelphia.
Jules Émile Saintin was a friend of the architect Charles Garnier and the painter Paul-Jacques-Aimé Baudry.
He was appointed a Chevalier (Knight) of the Legion of Honour in 1877.

Biography Jules Emile Saintin entered the Ecole des Beaux-Arts at the age of sixteen. He studied with Michel Martin Dr"lling, Edouard Picto, and Achille Jean-Baptiste Leboucher. Within three years, the young artist began to exhibit at the Paris Salon. By 1856, Saintin was living in New York City where he remained until 1863 when he returned to Paris. He made at least one visit to Rome in 1864, but remained a resident of Paris until his death. Saintin, known primarily for his portrait and genre scenes, began exhibiting at the Academy in 1857 and continued to show regularly until 1865. In addition to exhibiting at the NAD, Saintin showed at the Paris Salon throughout his career, and continued to be represented in American exhibitions after his return to Europe including the Boston Athenaeum, the Artist's Fund Society, the Cincinnati Industrial Exposition, and the Chicago World's Columbia Exposition. He served on the jury for French entries to the Philadelphia Centennial and showed at the 1878 Paris International Exhibition. Saintin's obituary recorded in the NAD Council Minutes of May 9, 1985, details his professional success and points out the close tie the French artist felt to the Academy which fostered his talent during his stay in America: Jules Emile Saintin . . . received medals in France in 1866, 1870, and in Munich in 1883. He was decorated with the Legion of Honor in 1877. 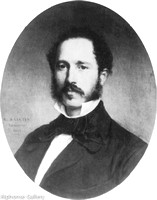 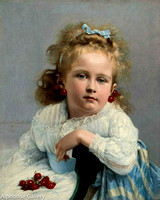 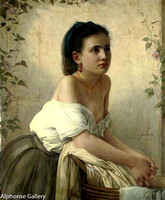