32 photos
JOHN WENDELL MINTURN (b. 1839 - d.1881) was the second son of ROBERT BOWNE MINTURN (1805-1866) who was one of the most prominent American shippers and merchants of the Mid-19th C (one of the owners of the famous clipper ship "Flying Cloud"). A May 1, 1881 New York Times article reported that John W. Minturn committed suicide at his Grinnell, Minturn Co. business the previous morning.
The Minturn family donated the land in the heart of Manhattan that became New York's Central Park.


Birth: Jan. 13, 1839
New York, USA Death: Apr. 30, 1881
New York, USA
Son of Robert Bowne Minturn and Anna Mary Wendell. Brother of Robert Browne Minturn, Susan Carter Baring, Anna Mary Quicke, Edith Sands, Sarah, Eliza Theodore, and William. Husband of Louisa Aspinwall. Father of Susan Ficken Minturn.
MISCELLANEOUS CITY NEWS; FUNERAL OF MR. MINTURN. SERVICES IN THE CHURCH OF THE HOLY COMMUNION.
Funeral services were celebrated in the Church of the Holy Communion, Twentieth-street and Sixth-avenue, yesterday morning, over the remains of the late John W. Minturn, who died last Saturday. Mr. Minturn had passed the greater part of his life in Europe for several years before his death, seeking the change of air which was necessary ... at the conclusion of the service the remains, followed by many friends of the deceased gentleman, were taken to Trinity Cemetery for interment.
New York Times Pub. May 4, 1881

DETAILS FROM THE ORIGINAL AUCTION LISTING -
The portrait photo is a thin paper which has lifted off the glass in the lower left corner which gives that lower diagonal area a lighter tone than the rest of paper. The portrait image itself is in good looking condition. A very clear and sharp image with expert coloring which gives it almost a portrait painting appearance. The Gurney brass frame with some spotted areas as found. There are two panes of glass- one with the photo on the back of it, and another pane in front of this. There is also the old cardboard backing for frame with the family information on it, written it appears at two different times in it's history, noting the photo was taken in 1858 - the year Jeremiah Gurney moved to his 707 Broadway studio.

The two young ladies in the dag are unidentified as well. They are dressed in black clothes with black headresses with pink tinted flowers in the left woman's hat. The young woman on the right is holding something in her hand with a gold highlight spot on the object. The maker's name on the brass frame is framed upsidedown from the image with stamp at the top. There is some spotting on the image and image is somewhat light in nature except when angled to the right lighting. There is some green spotting on the brass frame as well. The dag is in a period leather case with purple velvet on opposite side. The push button lock on case works well. The outer case is in surprisingly good condition with covers attached well and good spine. There is some wear to surface of leather as found from estate. 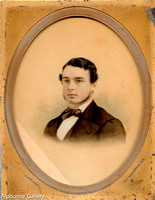 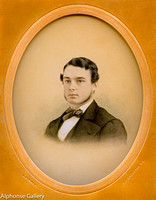 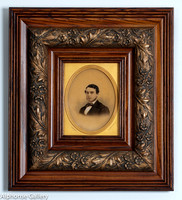 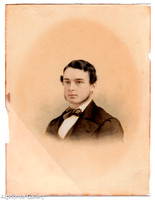 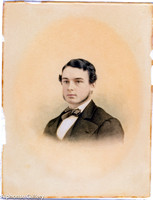 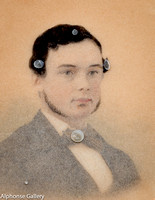 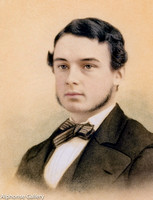 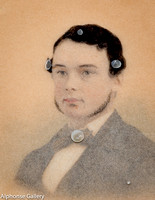 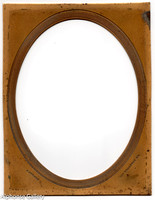 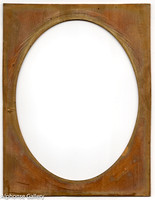 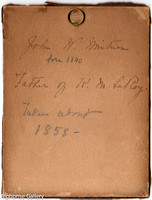 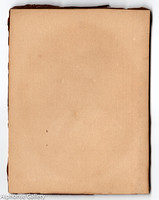 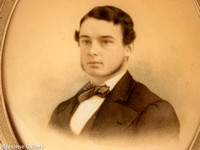 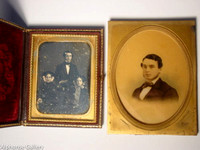 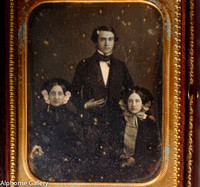