Markings:
(Recto, mount) lower center, imprinted: "Photo by J. Gurney & Son 707 Broadway, N.Y./ THE STUYVESANT PEAR TREE/ Imported from Holland in 1647, by Petrus Stuyvesant, Captain-General and Commander-in-Chief of Amsterday, in New Netherlands, now called New York, and planted in his/ garden, yet flourishes on the corner of Thirteenth Street and Third Avenue, the only living relic of the vegetable world which preserves the memory of the renowned Dutch/ Governor. This patriarchal tree is over 215 years of age, standing in the midst of strangers, crowned with the honors of age, and clustered with wonderful associations. This/ time-honored representative of past centuries is annually crowned with fruit of a choice variety; and although shattered by storms and decayed from age, has this season a more/ abundant harvest of its delicious fruit than in many previous years./ PHOTOGRAPHED BY J. GURNEY & SON, AUGUST 22, 1863/ Entered, according to Act of Congress, in the year 1863, by T. Porter Shaw, in the Clerk's Office of the District Court of the United Staes for the Southern District of New York
Object Number:
84.XP.772.7 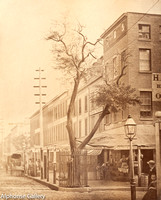