9 photos
Native American Chief. He was the principal chief of the Southern Arapaho tribe. He was born on the central Great Plains, probably in present Nebraska, and was known for his oratorical skills. As early as 1840 he had negotiated peace between the Southern Arapaho and several other Indian tribes, including the Plains Apache. He sought agricultural implements and instructions from the United States Government so that his people could provide their own subsistence. After he signed the Fort Wise Treaty in 1861 he became frustrated when whites failed to live up to the agreement. His feelings turned to anger following the massacre of Cheyenne and Arapaho at Sand Creek, Colorado in 1864. Despite his anger and the failure of the whites to live up to their treaties, he signed the Medicine Lodge Treaty in 1867. This treaty granted the Southern Arapaho a reservation between the Arkansas and Cimarron Rivers in the Indian Territory (presently Oklahoma). In what is known as the Battle of Washita, Colonel Custer attacked 51 lodges belonging to the people of Cheyenne Chief Black Kettle in a pre-dawn raid. Custer, in a gross overestimation, claimed 100 killed and Chief Black Kettle and his wife were among those. Custer lost two officers and 19 enlisted. After this battle, Little Raven fearing for the safety of his people led them to Fort Sill for protection. They and the Cheyenne were subsequently granted a reservation in the western part of the Indian Territory. He eventually was granted the old military hospital in Cantonment in present Blaine County, Oklahoma where he died.
Bio by: Tom Todd
June 1871 albumen photo on mount of Oh-Nas-Tie or "Little Raven," Head Chief of the Arrapahoes. Photographer is Jeremiah Gurney out of New York City. For the Trustees of the Blackmore Museum, Salisbury. A set of 12 of these scarce Gurney/Blackmore Museum photographs of Cheyenne, Arapaho and Wichita delegates sold for $40,250.00 in November 2005 through Cowan's Auctions. 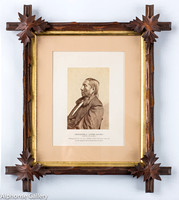 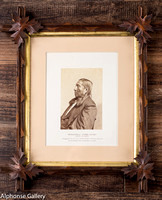 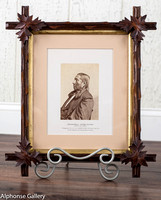 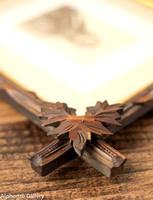 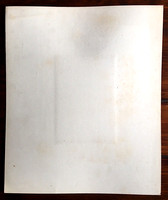