4 photos
https://opinionator.blogs.nytimes.com/2013/12/02/the-interminable-everlasting-lincolns-part-1/?_r=0
Ostendorf 115C
Description: Lincoln, Abraham 1809 - 1865 Enormous Brady portrait photograph of Abraham Lincoln 19th C. oval-shaped albumen print photograph of Abraham Lincoln based on 1860s Mathew Brady portrait and published by Gurney & Son., measuring 10" x 12.5" and mounted on stock cardboard decorated with stylized foliate border, measuring 14" x 16.875". The print appears extensively in-painted, with facial contours, hair, and clothing softened. Expected wear including scattered foxing outside of image. Small area at base of portrait colored in. Abraham Lincoln (1809-1865) may have championed the Republican Party, freed the slaves, and salvaged the Union, but the American public generally conceded that he was not handsome. Lincoln's homeliness was one of his most endearing attributes, further fostering the idea that the former rail-splitter born in a log cabin was one of the people. In fact, Lincoln exploited his awkwardness by wearing tall stove-pipe hats to further accentuate his 6'4" tall frame. Lincoln's face was gaunt, his neck was skinny, and his bushy hair was often in disarray. He had a large mole on his right cheek as well as a left drooping eyelid. These physical imperfections were silently corrected by photographers, like Mathew Brady and Alexander Gardner, who captured Lincoln's image in photographic studios throughout his political career. They understood the importance of presenting the President in his best light. Brady recollected retouching his Lincoln portraits so that the face was softened, the hair smoothed, and the neck thickened. 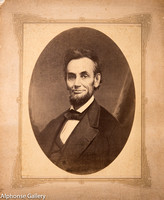 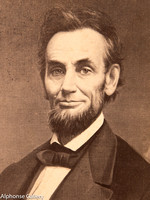 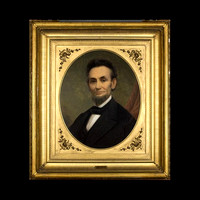