5 photos
http://digital.lib.uiowa.edu/cdm/ref/collection/leonard/id/28088 Link to scrapbook at The University of Iowa Libraries.


In 1868, a group of eastern newspaper reporters traveled west by train to see the progress of the Union Pacific's Transcontinental Railroad. They were organized by Charles Anderson Dana of the New York Sun, and were dubbed the Rocky Mountain Press Club. This composite photograph documented 28 of the participants, who are named with their newspapers in the key. See Ambrose, Nothing Like It In the World: The Men Who Built the Transcontinental Railroad, page 275. Though a scrapbook of their newspaper clippings is held by the University of Iowa, no other copies of this photograph have been traced.
http://www.nytimes.com/books/00/09/17/reviews/000917.17kisort.html 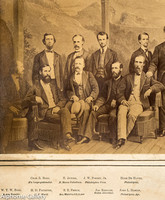 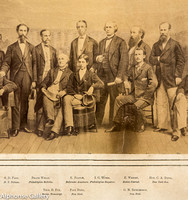