Galleries 2
Collections 0
Groups 0
John Plumbe Jr. was born in 1809 in Wales. At the age of 12, his family moved to live in America.

He was an pioneer and entrepreneur in the early days of photography. He opened and maintained the largest chain of galleries in the United States in the 1840’s. Plumbe is accredited with being the first to attempt a "famous portraits" collection” and the first to franchise photo galleries.

In 1838 he was employed by the U.S. government to investigate his passion for the possibility of a coast-to-coast railroad link. Funding was difficult and when government funds ran out in 1841 and he turned his attention to Photography after learning daguerreotypy during his travels.

In 1841, Plumbe took up daguerreotypy, and quickly franchised his galleries, opening 25 studios nationwide in just four years. He became one of the largest suppliers of apparatus and materials. He employed a staff at each location with a resident daguerreotypist, who actually took the daguerreotype and placed Plumbe’s stamp on it, therefore Plumbe did not take many himself. Plumbe traveled extensively to his studios managing efforts.

Plumbe was enterprising and he developed a mechanical hand engraving coping process that produced lithographic images from daguerreotypes. He called the method "plumbeotypes." He was planning on copying his photographs and making reproductions of them.

In 1842, a patent issued to Daniel Davis for coloring daguerreotypes (#2826) was signed over to Plumbe.

In 1847, still dedicated to the idea of a transcontinental railroad, and began selling off his galleries to the resident daguerreotypists.

In 1857, Plumbe committed suicide, believed to be from a deep depression over his impoverishment and hardships. He experienced bankruptcy in the mid 1850's, malaria and un-fullfillment of his life ambition of establishing the coast-to-coast railroad. 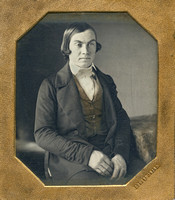 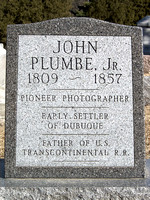