Everything GURNEY»Jeremiah Gurney Publications»The Royal Album: A Series of Photographs Taken from Life of H.R.H. the Prince of Wales by Gurney & Son

52 photos
An American Photographic Album of the Visit of the Prince of Wales, 1860
Jeremiah Gurney. The Royal Album: a Series of Photographs Taken from Life of H.R.H. The Prince of Wales and Suite at The Revere House Boston on the 19th October 1860 the Day Before Their Departure from America. By J. (Jeremiah) Gurney & Son (Benjamin) Photographic Artists.... [New York: J. Gurney & Son, 1860]. Approximately 11 x 8.5 inches. Quarto. Title page, dedication leaf, plus eleven original albumen photographic portraits, approximately 5.75 x 7.5 inches, mounted on heavy cardstock. Original publisher's full morocco over beveled boards, stamped in blind with gilt seal of the Prince of Wales on the front cover, all edges gilt, with original brass clasps. Portion of top clasp lacking, front joint cracked but holding, some darkening and crackling at binding extremities. Internally very clean, all images excellent.

A photographic souvenir album with portraits made in Boston during the Prince's 1860 tour through Canada and the United States. The future King Edward VII visited the northeastern United States, including Boston, New York, and Washington. This elaborate album, made up of original portraits of the Prince and his entourage, was made by New York photographers J. Gurney & Son, most likely as a memento for the gentlemen depicted in the photographs. This particular copy was presented by the photographers, "by Special Permission," to his Grace the Duke of Newcastle, one of the portrait subjects. Needless to say, a very rare American photographic book. Only two copies located in OCLC, at Harvard and the Abraham Lincoln Presidential Library. A third copy has been identified at the George Eastman House - archives. It's dedication page is inscribed to Lord Lyons. 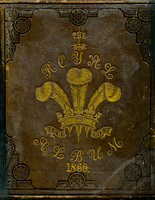 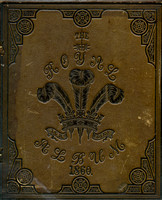 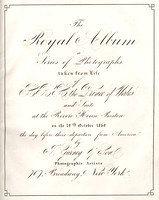 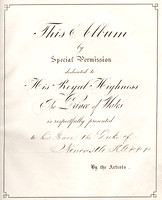