1839 - 1847
The 1846 issue below is the 43rd known copy to still exist. Link to excellent research project http://www.1846artunion.org
The first Journal ever to include photographs on its pages

In the spring of 1846 William Henry Fox Talbot provided over 6000 original Talbotype images to the Art Union journal in a promotional effort which today is largely overlooked. The images were published to popularise his photographic method and the publication was the first journal in the world to include photographs. Due largely to the haste of production, today, the images are often badly faded and this has contributed to the poor reputation of the feat. I believe however, that these unique images from the birth of photography deserve to be better understood and this project is setting out to find and catalog the images that survive in order that we can better appreciate this remarkable publishing first. Ian Wallace

LONDON: Printed by Palmer & Clayton, 1839-1847 [published date: 1839-1847]. Rare First edition. A complete nine year run. 4to. 11" x 9" inches (LxB). Fine original contemporary 3/4 calf leather binding over marbled boards, spine with 4 - 5 raised bands, & with two red-black-brown gilt lettered morocco labels. The first magazine in the world to be illustrated with a photograph’ (Gernsheim). With an original Talbotype of a marble Bust by Henry Fox Talbot . Also includes a two-page article on ‘The Talbotype-Sun Pictures’. This volume of the Art-Union journal is noteworthy for the early appearance of a photographic print in a periodical, a Talbotype, or sun picture, commonly known as a calotype. This copy with the variant Talbotype of a marble Bust. Gernsheim mentions that he had seen a dozen copies, each with a different image. [Gernsheim, Incunabula, 620]. Nine volumes with engraved plates, a few chromolithographed plates, illustrations. A complete nine year run. A classic work.


William Henry Fox Talbot (1800-1877), began experimenting with capturing images on light-sensitive paper around 1834, and patented the calotype, also called a Talbotype, in 1840. It was the first instance of a photograph secured on paper and produced with paper negatives, which allowed for multiple copies of the same image to be made, as opposed to the daguerreotype invented by L. J. M. Daguerre in 1839. In 1845 Talbot published The Pencil of Nature, the first book to be illustrated with photographs, and the appearance of a Talbotype in The Art-Union is likely in response to the reaction to the book. The accompanying text, nearly two pages, describes the process and Talbot's development of it.
'The liberality of Fox Talbot, Esq., has enabled us to introduce in our next number a specimen of The Talbotype. It is needless to observe that, although the fame of this wonderful discovery has gone over the world, comparatively few have had the means of examining it ... '. (The Art-Union, pg. 142). 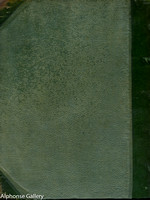 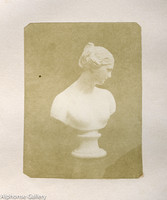