Galleries 5
Collections 0
Groups 0
Original Sales Description -
The main subject here is Adonijah Jackson Underhill. This NYC businessman was the son of Adonijah Daniel Underhill (1763-1840). His father received 200 acres of land in Jericho Long Island in 1793. He freed the slaves there and was active in anti-slavery activities. He was involved in the development of a Quaker Meeting that is still active. [A member has sent me copies of some related Underwood family portraits, that can be supplied. These suggest possible other family members.]
There is a 1/4 plate portrait of him by Gurney. By coincidence an almost identical portrait was offered in 2005 on eBay that led to the current identification. This plate is still sealed but it has the richness of an original, not a copy, so there is the possibility that the other image, now in the collection of a Quaker school near Philadelphia, was a copy made by Gurney. It is in a full separated case [4]. A 1/4 plate, in stippled arch-top mat, in half case, shows a younger Adonijah with his son (not correct - Adonijah had no children - this is his nephew Daniel with his son Samuel). This too is sealed [3+]. A 1/4 plate, also sealed, is a portrait of this son (slightly older) holding the hand of a younger sibling. This has nice coloration on the clothing. There is some haze, possibly on the plate, that makes the boy's face appear soft. The scan makes this look worse. It is in a thermoplastic case (1-34) that lists in Berg's book on cases. (Case has just a slight roughness on one edge, otherwise no damage.) [3]. Finally a fine half plate by Gurney of this son, standing, holding his cap. [4-]. Four fine daguerreian portraits. 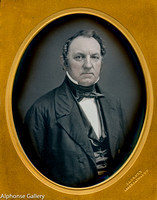 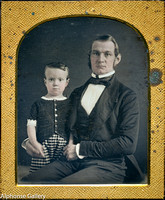 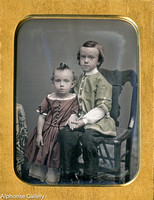 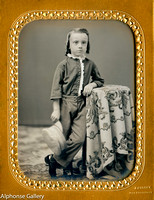 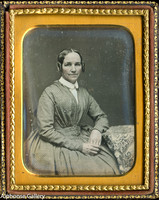